Posted on February 28, 2018 by toppsheritageblo

The 2018 Topps Heritage frenzy is only a couple of days old but it has already produced some interesting variation cards. Of course the Ohtani Action Image variation card is going bonkers, but a couple of cool/strange Mike Trout have popped up as well. The first is the nickname variation card of which there are several other players that have these as well. The Trout card seems strange because of all the “i’s” they put in his nickname: 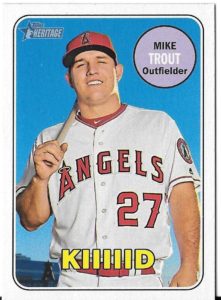 The over Trout variation is the “batboy” variation card. It got that nickname thanks to the 1969 Topps Aurelio Rodriguez card that accidentally pictured the team batboy on the card and never corrected it. I’m guessing this is another Angels player and not the batboy, but I’m not sure exactly who it is. 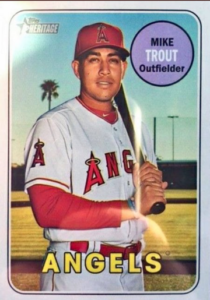 This entry was posted in 2018 Topps Heritage and tagged 2018 topps heritage. Bookmark the permalink.