Posted on January 11, 2013 by toppsheritageblo 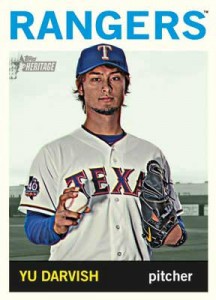 For the thirteenth year in a row, Topps will release it’s annual vintage tribute set with 2013 Topps Heritage. The basic format has become very familiar to heritage collectors by now, with a base set of 500 cards including regular base cards (cards 1-425) and 75 short prints (cards 426-500). This years design is based on the 1964 Topps set. There are several variations of some of the cards including action image and color image variations which will only be found in hobby packs, the hard to find super short print variations which usually pay tribute to errors in the original set and Houston Colt 45 uniform variations of each Houston Astros player. We won’t know the odds on the variations until the set is released, but regular short prints will be found at a rate of one in three packs…same as last year.

There are new insert sets as well. The familiar ones make their return with the 15 card New Age Performers set, ten card Then and Now set, ten card Baseball Flashbacks set and ten card News Flashbacks set. New for 2013 is the Memorable Moments set which will contain cards that show great moments from the 2012 season, such as Robinson Cano going O-fer in the Home Run Derby. Just kidding Cano fans!

A couple of new parallel sets will be making their appearance in 2013 too. As expected regular chrome cards will be numbered

collectors and baseball card collectors will be joined in he fun by stamp collectors, as the new 1964 U.S. Postage Relics will contain an actual postage stamp from 1964 and will be serial numbered. Another new set is the Esteemed Heritage Book Card set. Each of these cards are one of one and contain a bat plate, bat knob or patch.

The autograph subsets are similar to last year. Real one blue auto’s and real one red ink auto’s that are numbered out of 64

Autographed relic cards give you the best of both worlds with an auto and a piece of game used material or stadium seat. Clubhouse Collection Auto Relics and Flashback Relics (piece of stadium seat) are numbered out of 25 while Clubhouse Collection Dual Auto Relics feature one current and one retired player, a piece of memorabilia and autograph from each, are numbered out of ten and are only found in hobby packs.

If you have opened hobby boxes before you ready know that each one contains a special one card pack at the top of the box known as a box topper. These will contain a regular box topper three card panel, a 1964 Topps original box loader which is an original 1964 Tops card that has been foil stamped with a Topps Heritage logo, or a Jumbo Box Loader which are modeled after the 1964 Topps Giant cards. Some of these giant cards will contain a relic numbered out of 25 or an autograph numbered out of ten.

With a scheduled release date of Wednesday March 6th, we will have to wait a few days linger than usual but it should be worth the wait. This years design looks very nice and autographs are supposed to be twice as easy to pull as last year. Get ready to rip Heritage fans!

This entry was posted in 2013 Topps Heritage and tagged 2013 topps heritage. Bookmark the permalink.