Posted on April 1, 2012 by toppsheritageblo

Well, after the initial rush has died down I might finally have some time to show off some of my 2012 Topps Heritage pulls.  Since I opened significantly fewer cases this year than in years past, I did not hit any of the super rare pulls, but I did get some nice cards.  I’ll start off with the black border refractors which are numbered out of 63 this year.

The first black refractor I pulled from 2012 Topps Heritage, and it came out of a Walmart blaster! Not too shabby. 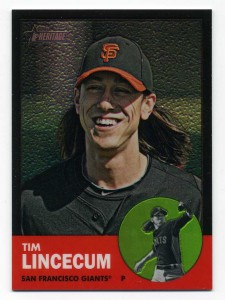 I only pulled one black refractor out of two hobby cases, and it was this former Oakland Athletic pitcher: 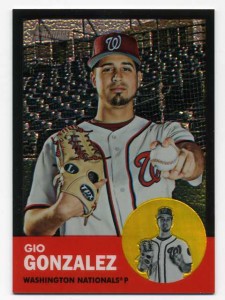 I bought two cases of blaster boxes this year, with 16 blasters in each case. Through the first 31 boxes, I had pulled a grand total of zero autos and zero black refractors. Well, the final blaster box did not have an auto, but it did yield this nice black refractor: